This tale takes place in a world which exists in an argon bubble in chromium, inhabited by a civilization of pneumatically-powered machine men, who gain their life energy from spouts from which argon under higher pressure can recharge their reservoirs.  One of them, a scientist who has discovered that their brains and memories are active patterns of argon currents within their heads, is faced with the apparent problem that all their mechanical clocks are now running more rapidly.  Indeed, it appears that everything is running more rapidly.

He invesigates, and discovers that what is actually happening is that the pressure differential between the master reservoir of argon and the atmosphere in the chromium bubble is being equalized.  As the pressure differential drops, the life processes of the machine men have less available energy and thus slow down.  It is not that the clocks are running faster, it is that the people are running slower.

Since their life and memories depend on drawing work from the pressure differential, this equalization will ultimately mean the utter extinction of their race and civilization.  The story is in the form of a first-person narrative, the scientist writing it down so that successors from some hypothetical other world may know of him and his race, and their lives.

The central concept of the story is the doom of entropy.  We humans live in a vastly larger and more complex Universe than do the machine-men (who, despite their confinement, have managed to construct a high civilization), but we are equally sentenced to ultimate death by entropy.  We never learn who created the machine men, or why (their forms, as described, seem exceedingly improbable to have evolved rather than been invented).  But then again, the origins of our own Universe are equally obscure.

If their world is an experiment, it might be judged a cruel one.

This is an awesomely effective and thought-provoking short story that, to me, exemplifies the best potential of philosophical science fiction.  It reminds me of some of Arthur C. Clarke's best work -- not so much in style, but through intellectual scope.  It is a story which I shall remember forever.
Posted by Jordan179 at 8:11 PM 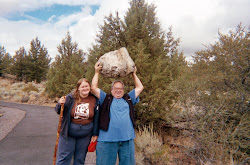 Jordan179
I was born in the Bronx and lived on the East Coast, mostly in New York, until the cruel forces of economics told me to go elsewhere. Now I'm starting over again in the San Francisco Bay area, where I have family. My goal in life is to become a professional science fiction writer. I write and edit Fantastic Worlds, a fantastic fiction blogzine. I am very happily married.